After Captain Jim Mulligan’s Navy plane was shot down during the Vietnam War, he was tortured for 7 years in Hanoi, Vietnam prison camps. He was a prisoner of war (POW) and was 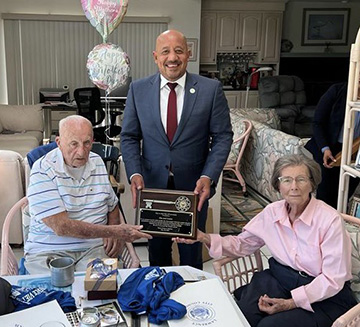 targeted by the enemy for worse treatment because he was uncooperative.

Meanwhile back in the United States, his wife Louise became a national leader to make the POWs a priority for U.S. decision makers.  Their stories have a happy ending with Captain Mulligan’s release from captivity on February 12, 1973, and the phone call that Mrs. Mulligan received from President Richard Nixon in appreciation for her diligence in keeping the POW issue a priority in the country.

Jim (96 years old) and Louise (92 years old) are Lawrence natives now living in Virginia Beach, VA. Their stories are so profound that top Lawrence officials took an extraordinary trip to their home to formally thank and honor the couple for their distinguished service to our country. Google and YouTube searches reveal their stories, and books have been written that chronicle the dark period that they ultimately overcame.

On May 17, 2022 the Lawrence High School JROTC honor guard took down the Lawrence flag and presented it to me before the City Council passed the resolutions to honor the Mulligans.  The next morning, armed with mementos and well wishes from the Lawrence institutions that were important to their lives, Mayor Brian A. De Peña, Council Vice President Estela Reyes, Mayoral Advisor Octavien Spanner and I flew to visit the Mulligans to officially acknowledge their sacrifice, patriotism, and faith.

We spent two hours in their home discussing their Lawrence roots, their experiences during the wars – Captain Mulligan is a WW2, Korean, and Vietnam War veteran – and their lives today.

Interspersed during our visit were several presentations.  The City Clerk provided their birth certificates – Jim was born on Lynn St and Louise was born on Farnham St – which Mayor De Peña signed in their presence.

Ed “Hoppy” Curran, the leader of the Lawrence Vietnam War Memorial organization, provided his organization’s hat, shirts, music CDs and pins.  Captain Mulligan was especially impressed with the pins since they depicted the Vietnam POWs.

During the May 17th Lawrence City Council meeting, Central Catholic’s David DeFilippo read a touching framed letter written by school President Christopher Sullivan. I read the letter to Captain Mulligan during the visit, and he was genuinely moved by the words. He graduated from Central Catholic High School in 1944 while he already began his training with the Navy. The school also sent with us a beautiful time piece with an inscription and the school seal.

In addition to the good wishes by Lawrence High School’s Head of School Victor Caraballo-Anderson to Mrs. Mulligan (LHS class of 1946) we also brought good wishes from Fr. Paul O’Brien of St. Patrick Church.  Louise and Jim both attended St. Patrick’s Church, Jim went to St. Patrick’s School, and they both met each other at a Catholic Youth Organization dance at the parish hall. They have been married for 73 years.

Finally, Ms. Reyes and I gave the Mulligans their City Council resolutions and the city flag which flew over the Campagnone Common the day before. The Mayor gave the couple the key to the city and said that “Lawrence is always their home.” He then made the room laugh when he added that they, “don’t need the key. But if the lock is changed, the key works for any lock.” The Vice President followed up by reading the heartfelt inscription on the key.

Before we left, Captain Mulligan said to us, “Thank you for being so kind to remember us. We always remember Lawrence. I never realized that something like this would happen to me so late in my life. So thank you.”

This was a special trip, and I am glad that our city saluted the Mulligans for their distinguished accomplishments. Captain Mulligan has a corner dedicated to him at the intersection of Salem and Everett St.

Mrs. Mulligan’s story is so impressive that the rights from the book, “League of Wives” by Heath Hardage Lee, has been purchased by Hollywood’s Reese Witherspoon and Sony Pictures. Louise is a central figure in the book.  Let’s not forget the sacrifices made by this couple and their direct ties with us.  While we have honored Jim with a square at the intersection of Salem and Everett St, let’s now consider how we can honor Louise.

Lawrence Police ready for summer A top priority of Mayor Brian A. De Peña and Chief Roy P. Vasque is to address all quality-of-life issues in the City, particularly as the warm weather is upon […]